For many years, the Club held a “ladies night” social event where the wives of Rotarians participated with members in a festive dinner party.  In 1948, the event was Latin American themed to match the Rotary International Convention that was held that year in Rio de Janiero.  The evening featured Spanish dancers and musicians.  The Fort Myers High School Glee Club performed as well.

Another themed party from the period featured Rotarians and their wives in pirate garb. Fort Myers also hosted the Rotary District conference.

In 1949 our Club sponsored an “Old Clothes Drive” to provide clothing to people in need overseas. To encourage participation, the Club vowed to strip any member who failed to contribute clothing for the drive. Only one member—Dr. H.E. Cunningham, then President of Edison College—failed to contribute anything. He was sent home wearing nothing but a barrel. The photo made the front page of the News Press and also was featured in The Rotarian magazine. 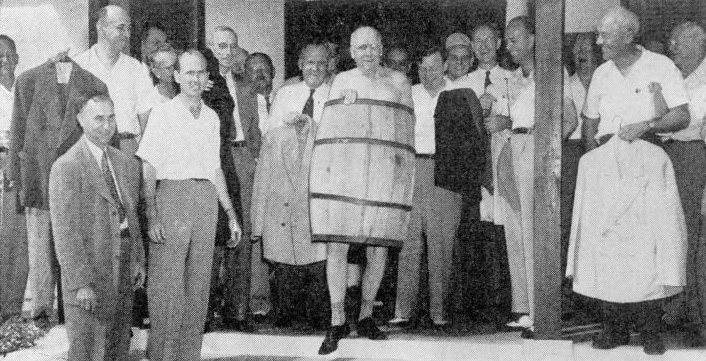 Fundraising efforts continued to bring new hope and support to local charities and causes in this period.  In 1956 our Club hosted a Millionaire’s Carnival which featured food and games.  The event benefitted the Fort Myers Little League and the Rotary Foundation The event was repeated in 1968, and for several years afterward, to raise funds for establishing the Nursing School at Edison College (now Florida SouthWestern College).  The Club has long supported Florida Southwestern College by awarding scholarships to incoming freshmen.

Through this period, our Club maintained an impressive schedule of weekly speakers.  Many were local leaders and some were nationally-known figures.  In 1972, for example, Everglades champion Marjory Stoneman Douglas spoke to our Club.

For many years our Club has supported rising young leaders from across the globe.  Though Rotary Youth Exchange Program, our Club assists the District in hosting exchange students.  These students spend a year in our region, gaining valuable leadership and cultural experiences that they can use to change the world.  Our Club’s participation began in 1949.

The Rotary Yak Began Circulation in 1947

Each week, our Club sends out a newsletter to inform Club members about our weekly program, our recent accomplishments, and our upcoming events.  Known as the Rotary Yak, the newsletter has been in circulation for over 70 years.  Rotarian Ernest Stevens started the “Yak” in 1947. 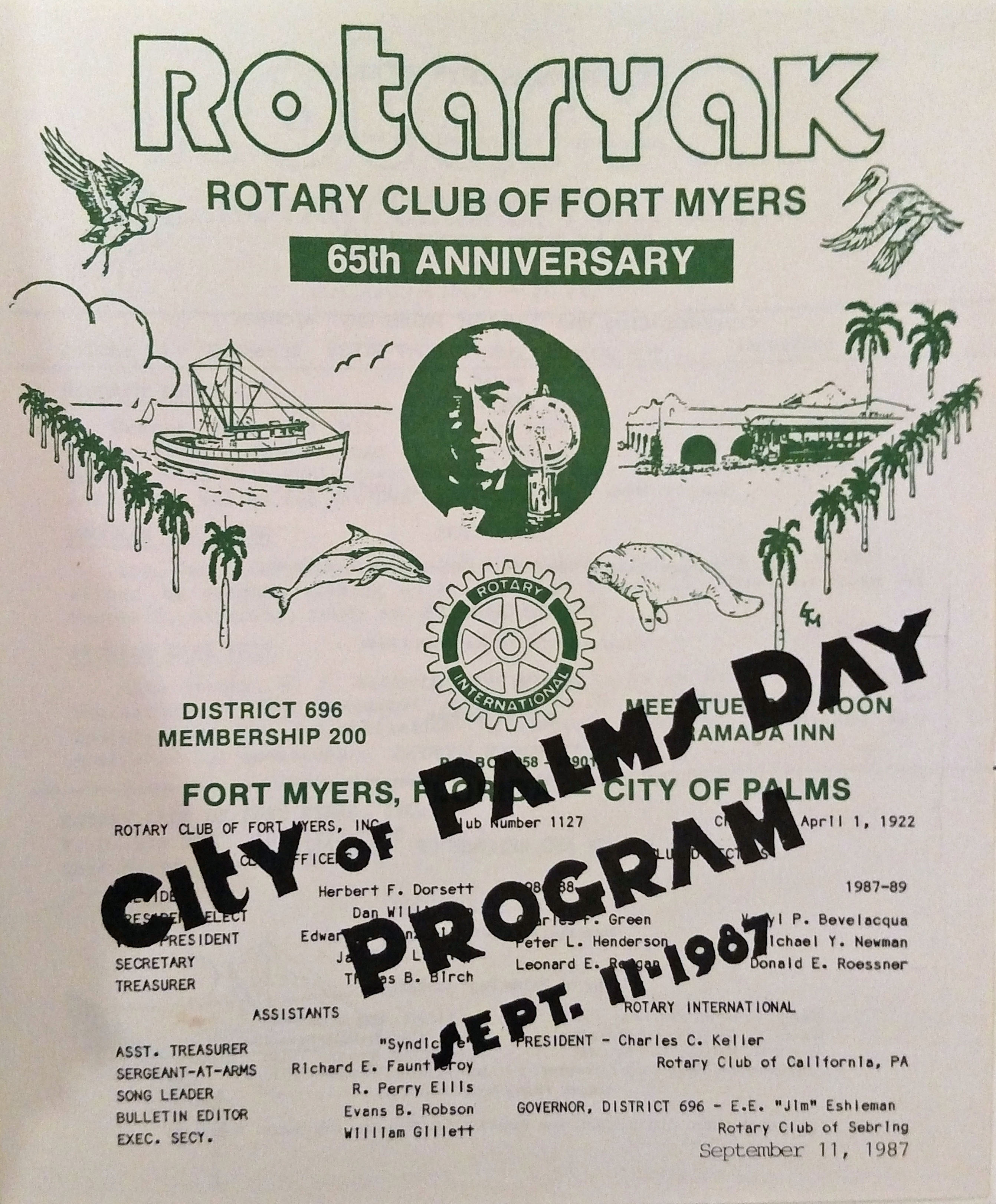 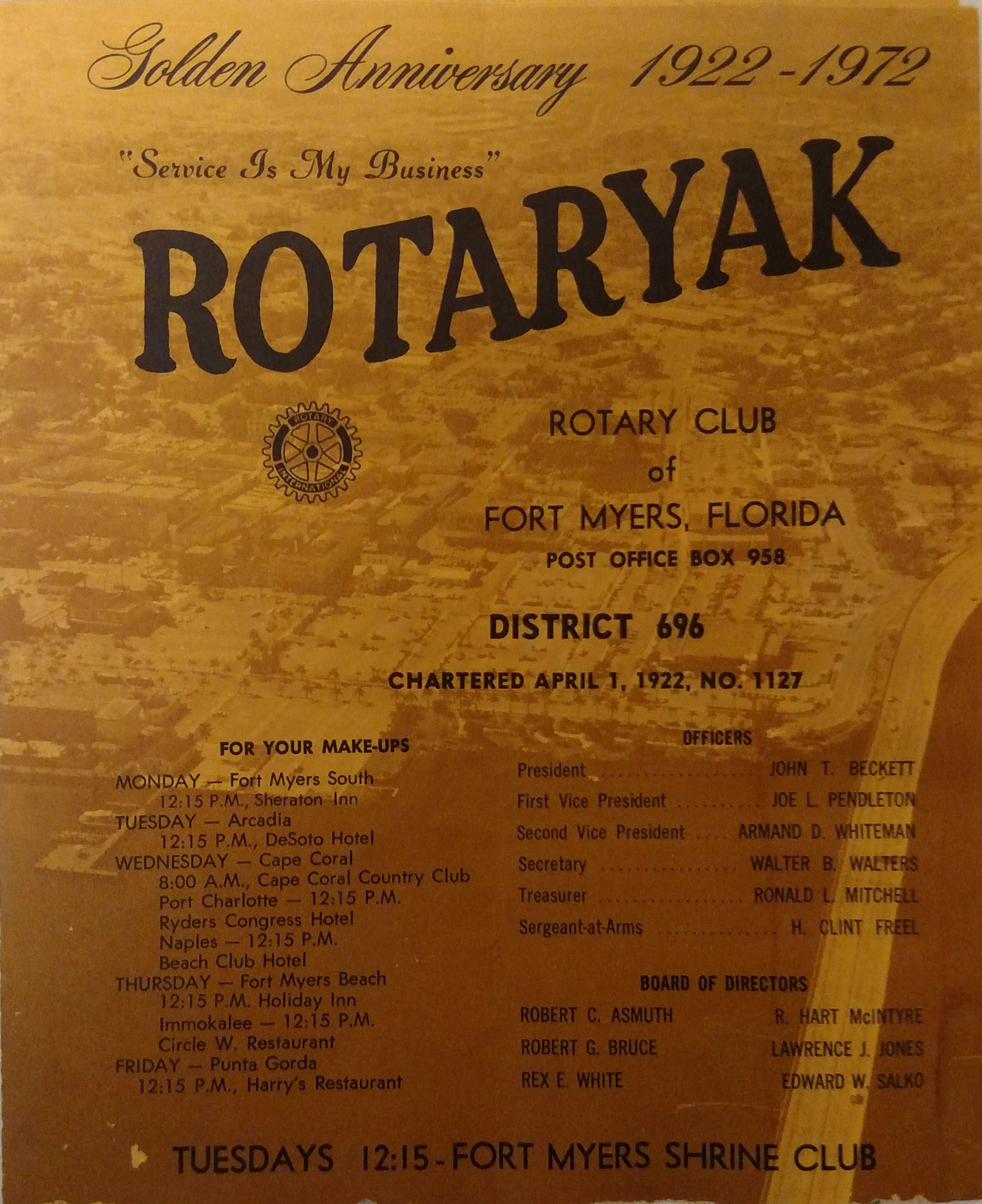 The Palms on McGregor Boulevard

Fort Myers has been known as the City of Palms since the early twentieth century.  The Rotary Club of Fort Myers played an important role in developing this moniker.  McGregor Boulevard is known for the countless royal palms that line each side of the road.  Thomas Edison planted the first royal palms which extended a mile along McGregor Boulevard.  The City maintained them.  In 1923, our Club became involved and extended the palms by five miles.  Thomas Biggar, a member of our Club, led the effort.  In later years, our club sponsored the City of Palms Day celebration to encourage the community to care for and plant palm trees and also to raise money for their maintenance.

In the 1950s, Rotary International pushed for the formation of youth-level Rotary service clubs.  Initially known as Wheel Clubs, these organizations sprung up at high schools across the United States.  The Rotary Club of Fort Myers sponsored the first Wheel Club in 1955.  Later, the Wheel Club name changed to Interact.  Our support of an Interact Club at Fort Myers High School continues into the present.  Similar to Interact in its mission, Rotaract Clubs function at the college level.  Our Club has sponsored a Rotaract Club at Florida SouthWestern College for over thirty years.

Another legacy of our Club from the 1980s period was the establishment of mile markers along McGregor Boulevard.  The markers, which consist of seven plaques set in the ground, honor a beloved member, J. Michael Lawrence, who was killed in a hit-and-run accident in 1980 while jogging in Fort Myers.  Each marker reads “Rotary Club of Fort Myers: In Memory of J. Michael Lawrence.”

Many of us know we were the first Club in the Southwest Florida region. Some of us may not know that we were the only club in Lee County until 1955.  Originally, there was no city or community in our district with more than one Rotary Club. At the time our district stretched from Marco Island to the Orlando area. Rotary International had defined territorial boundaries for all clubs as they were chartered.  In the case of the Rotary Club of Fort Myers, these limits restricted the formation of any Club in Lee County without our permission. So from the time of our Club’s formation in 1922 until 1955, we were the only Club in the county.  The Fort Myers Beach Rotary Club was the first to receive permission to form in Lee County (1955).  The second was the Rotary Club of Cape Coral in 1964, and as Lee County grew, our Club chartered numerous additional Rotary Clubs in the area.  Regionally, we sponsored the formation of clubs at Punta Gorda, Sarasota, Arcadia, Naples, and Immokalee.

After the Rotary Club of Fort Myers lost their original charter document in a fire in 1955, the District Governor presented a new one to President James A. Franklin Jr. IV. IV.

The Importance of the Rotary Anns

When our Club was founded in 1922, women were not permitted to be members of our Club, or any Rotary Club for that matter. Thus, the wives of Rotarians banded together to form Rotary Ann Clubs. The Rotary Anns of Fort Myers organized in 1949 with the stated purpose to aid and abet their Rotary husbands, and to encourage fellowship and friendship among the women of Rotary.  The Rotary Anns of Fort Myers held their own meetings and fundraisers while also contributing their time and talents to numerous Rotary projects.  The Rotary Anns disbanded in 1994, several years after Rotary accepted women into their ranks.  Since then, women have become the fastest growing segment of Rotary Clubs around the globe.

To memorialize our 75th anniversary in 1997 and continue in our tradition of giving back to the community, our Club developed a playground for special needs children at the downtown Centennial Park.  The playground included a Braille tic-tac-toe board, an elevated sand box, a rainbow arch, a power swing, and a crawl tube.  A special issue medallion, created with silver from the shipwreck Atocha, also was developed for Club members as a commemorative item.

A principal fundraiser for our Club from the 1990s until the 2010s was parking for the Boston Red Sox spring training games, which have been held in Fort Myers for decades.  Beginning in 1993, the Boston Red Sox hired the Rotary Club of Fort Myers to direct car parking at City of Palms stadium and, later, at the new Jet Blue stadium.  Club Member Evans “Rusty” Robson parked at every game from 1993 until his death in 2006, for a total of 305 games.  Indeed, parking is an area of expertise for our Club and continues to help us raise funds that impact our community in a positive way.

Another way our Club helped to beautify our community and help people in need was painting houses. Our members volunteered countless hours to paint dozens of homes in Fort Myers.